Maximum noise level standards and regulations for live performances make optimal sound quality more important than ever. Furthermore, sound quality is already greatly determined by a venue’s own acoustic properties, but this can often be improved by sound dampening drapes.

We offer a range of acoustic fabrics that meet today’s high quality requirements. They are designed to control sound conditions in architectural environments and are used at all types of venues including museums, school auditoriums and theatres, recording studios and sound sets, in dance, drama and music rehearsal spaces.

In order to help you choose the right acoustic solution, we will guide you through our acoustic indicator.

What is the problem?

The first and most important question you’ll have to ask yourself is what do you want to solve? One of the most common mistakes when dealing with acoustics is not knowing the difference between sound absorption and sound insulation. 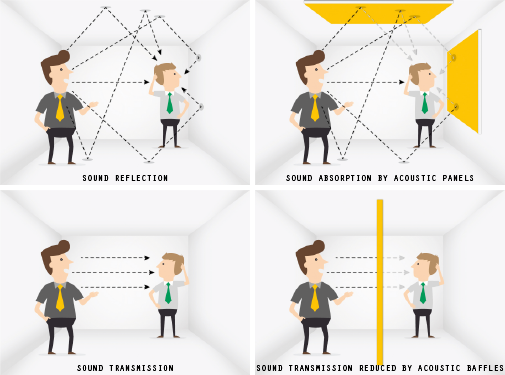 Spaces that create an echo, or which are noisy even when very little sound is being made, need sound absorbing materials. These focus on sound problems occurring inside a space that is probably large, open, or that has many hard surfaces reflecting the sound. Sound absorption deals primarily with the shortening of reverberation times, improving speech intelligibility and decreasing background noise.

When you are trying to stop the transmission of sound from one area to another, you need sound blocking solutions. Sound insulation is used to improve the degree of speech privacy within a room, or to block unwanted noises from outside a room.

Scenic fabrics with an open weave or netted structure are perfect for masking speakers or other audio installations without affecting sound quality. ShowTex even offers a unique acoustically transparent velvet, which allows perfect and unimpeded sound transference.

What is the sound source: music or speech?

Each type of music or human voice has its own place in the sound spectrum and will therefore need its own different acoustic solution, through the application of either sound absorption or sound insulation materials.

What kind of music?

Hip hop, modern R&B and electronic dance music contain lots of low frequencies. These need to be controlled by either a very specific low-frequency sound absorber (bass traps) or a sound insulator. Often an entire installation is used to deal with this.

Unlike electronically amplified music with its short reverberation times, an orchestral band, opera or jazz trio requires long lines of reverberation so the music can be amplified by the venue’s acoustics and surround the listener.

What kind of speech?

To increase privacy by ensuring that conversations are kept within a room, it is important to know the voice type you wish to insulate. Just as with music, every voice has its own place within the sound spectrum. A low-pitched voice (Barry White) is harder to insulate because it has more energy in the lower end of the sound spectrum, while a high-pitched voice will need a less drastic insulation approach. 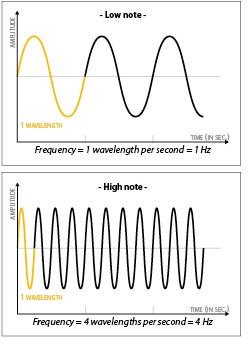 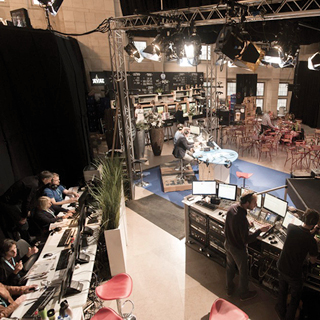 What’s the function of the room?

A short reverberation will provide for very good speech intelligibility but could lack the bombastic and impressive feeling created by a longer reverberation.

Sound absorption has a rating system that is mainly used for comparing products. It is not a fixed value.

The weighted sound absorption rating (αW) is also known as the alpha rating. This value goes from 0 to 1 and indicates how much of the incident sound will be absorbed by the fabric.

For example: Velours Bellini has an alpha value of 0.80, meaning that 80% of the incident sound energy will be absorbed and only 20% will be reflected back into the room, resulting in a less reverberant venue.

In certain situations, the alpha value may give you insufficient information in order to choose the best acoustic solution. This is why we added some frequency dependable information to our database.

(H) = high-frequency octave bands of 2 and 4 kHz score better than shown by the alpha value.

For example: the Acoustic Baffle has an alpha value of 0.75 with two form indicators: M and H. When taking a closer look at the octave band values of 1000 to 4000 Hertz, you’ll see that it will absorb 100% of the incident sound energy on these frequencies (instead of 75%). 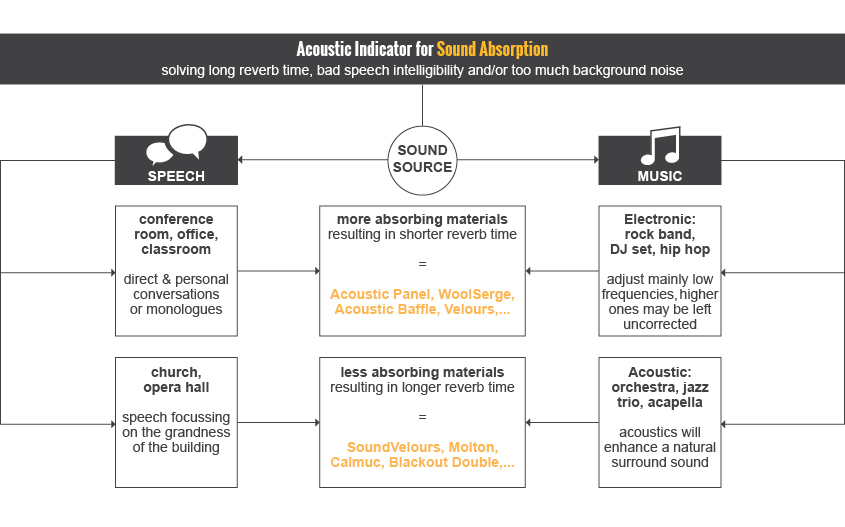 Sound insulation has a rating system that is mainly used for comparing products. It is not a fixed value. 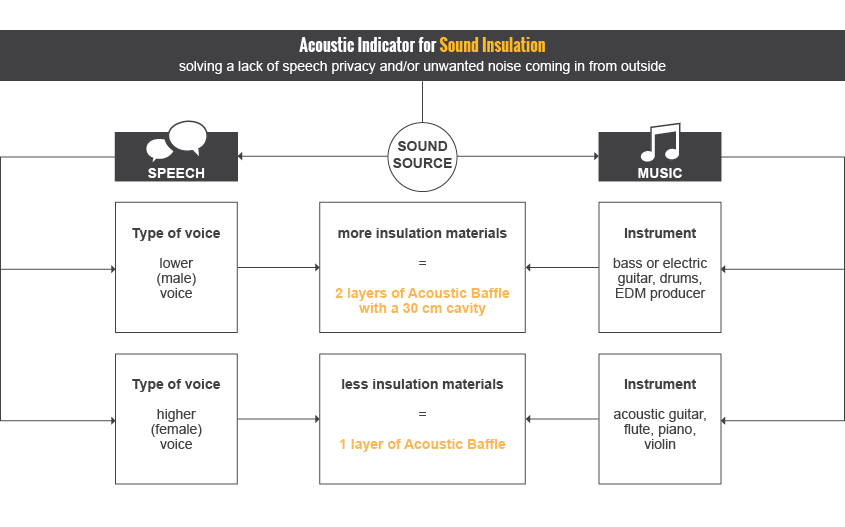