Where’s the projector: front or rear? 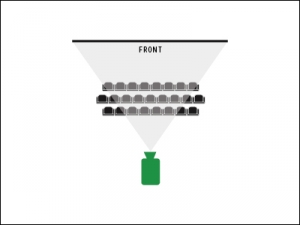 Dual or Twin Projection
Some screens are used for both front and rear projection, they are called dual screens. 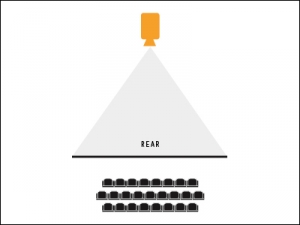 A screen with a flat gain ratio diffuses light more evenly in all directions, great for seating to be placed in a wide viewing angle relative to the screen.Spectators will experience a similar image quality regardless of the angle of view.
A screen with a peak gain ratio is more suitable for set ups with a more narrow viewing angle, as the image quality increases to those seated in the center, but drops for those seated at the outside. 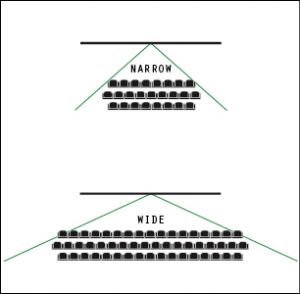 Number of projectors: single or multiple?

Single projectors are used in more classical setups such as, cinema’s (temporary or permanent), relay screens (e.g. on both sides of a stage) or smaller conferences (e.g. meeting rooms)
The brightness of the projection can be increased by using a “double stack”, this is when two projectors are placed on top of each other to create one brighter image.
Soft edge blending is a method whereby two or more projectors are used together. The edges of each of the projected images are overlapping, creating a wider display more suitable for showing wide screen content. Obviously, this works best with screens that have a flat gain ratio and therefor reducing the “hot spot” effect and enlarge the viewing area. 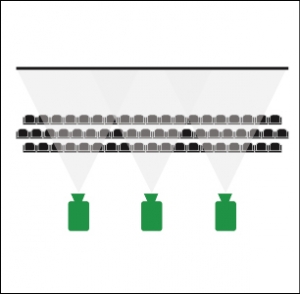 Ambient lighting: relevant or not?

Contrast is the difference between the whitest white and the darkest black displayed; the greater the contrast, the better the screen. However, ambient lighting has a big effect on screen contrast.
As front screens reflect all light sources, their perceived contrast is highly dependent on the presence of ambient light. Overall, front projection screens with higher gains will do the best job of preserving image contrast.
Since a projector cannot project black in its content, it is actually the absence of light that you are seeing. Darker screen surfaces reflect less of the ambient light sources and they appear to have “darker” black levels because of the colour of the projection surface. This actually increases the contrast perception of the projected image. 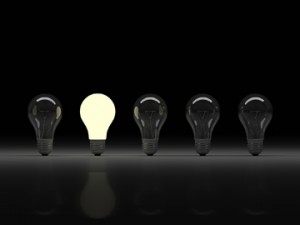